The Hammerstorm is a Nerf blaster that was released in spring of 2020 under the Alpha Strike series.

It is a Target exclusive in the United States.

The Hammerstorm is a hammer-action blaster, similar to that of the Zombie Strike Hammershot and the Negotiator. It features an eight dart cylinder.

Two tactical rails are present on the blaster, one being on top, and another smaller rail on the bottom. Near the Hammerstorm's firing trigger are holes to store up to eight darts. This makes the Hammerstorm the first Alpha Strike blaster to feature attachment points. 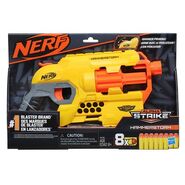 The European packaging for the Hammerstorm.
Add a photo to this gallery

Retrieved from "https://nerf.fandom.com/wiki/Hammerstorm?oldid=206214"
Community content is available under CC-BY-SA unless otherwise noted.