The Hail-Fire is a Nerf blaster that was released on September 9, 2012, under the N-Strike Elite series. It requires four "AA" batteries to be operated.

The Hail-Fire is a battery-operated semi-automatic flywheel system electronic clip system blaster. Its main feature is that of a rotating clip rack, which can hold up to eight clips at a time. This rack comes disassembled in packaging, and must be attached to the blaster.[1]

It features an "Advanced Handle", which doubles as a carry handle and the mechanism which advances clips in the rack. Pushing it forward and then back will rotate a new clip into place. A clear jam door sits above where the active clip sits, inline with the blaster's internals and barrel.

It features two tactical rails: one on top of the blaster and one underneath, in front of the rotating clip rack. There are three strap points, with one built into the blaster's grip and one on either side of the blaster, atop the clip rack.

The Hail-Fire is advertised as the "highest capacity Nerf blaster ever", claiming a maximum capacity of 144 darts. This, however, requires separate accessories and additional darts than what is included, as the Hail-Fire only includes twenty-four darts and four six dart clips.

The Hail-Fire can use eight Firefly Tech clips, four eighteen dart drums, or four thirty-five dart drums at once with no spacing issues.[2] This would give a capacity of 144 darts, 72 darts, and 140 darts, respectively.

Using the N-Strike Flip Clip accessory, it is theoretically possible to have a total of 288 darts, connecting sixteen N-Strike eighteen dart clips together and equipping them to the Hail-Fire. Similarly, the N-Strike Modulus Flip Clips theoretically provide a capacity of 192 darts. Despite these being possible, the Hail-Fire carousel has been reported by some as notoriously flimsy and apparently does not advance well with a load much greater than originally prescribed.[citation needed]

The Hail-Fire was announced on February 10, 2012, alongside the rest of the N-Strike Elite series.[3] The blaster was specifically mentioned as "the most impressive blaster in the collection hitting shelves on 9.9.12".[4] Some fans initially believed that the Hail-Fire would be a re-released Longshot CS-6, in the veins of the Rampage, an updated Raider Rapid Fire CS-35, and Retaliator, an updated Recon CS-6. This was later dismissed when the blaster was featured in a teaser "sizzle" video shown at the 2012 New York Toy Fair.[5][6] This led some fans to create mock-ups of the blaster, based on what little imagery had been shown off.[7]

Images of the Hail-Fire were included in a German website's accidental leak on April 5, 2012.[8] It was then given an outright reveal on April 27, 2012.[9] Official images were finally on May 30, 2012 from Nerf's Facebook page.[10] From there, video demonstrations would be shown and other forms of information until it began appearing on store shelves, in some places earlier than others.[11]

In 2014, a Sonic ICE variant of the Hail-Fire was released.

The Hail-Fire has been released with the following color schemes:

As a motorized flywheel blaster, the Hail-Fire is a candidate for voltage modification[12] and motor replacement.

The two semicircular pieces that cover the clip carousel can be removed after assembly, with some force. Without the large cover pieces, clips do not have to be removed to load darts. This also allows the carousel to be rotated easily by hand. 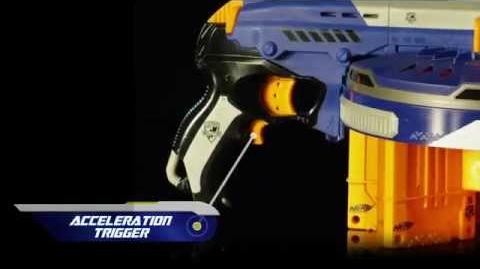 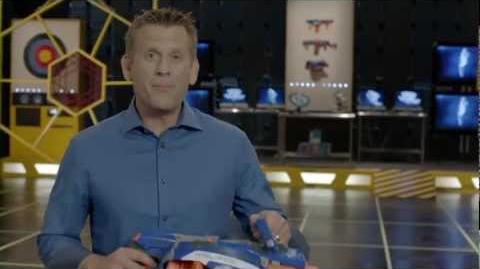 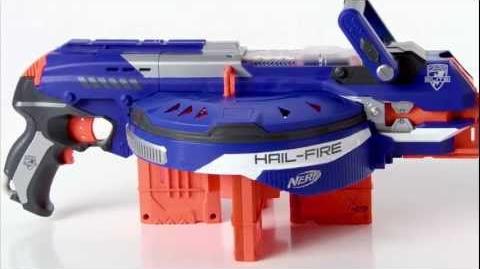