The Gripstrike is a BOOMco. dart blaster that was released in 2015.

The Gripstrike is a small trigger-less blaster. It is fired by squeezing an air bladder, which doubles as the blaster's main handle. It has a dart holder on top.

the Gripstrike has been released with the following color schemes 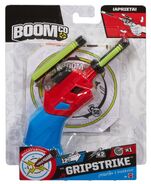 The packaging for the red Gripstrike.

The blue, yellow, and black Gripstrike.

The packaging for the blue Gripstrike.
Add a photo to this gallery
Retrieved from "https://nerf.fandom.com/wiki/Gripstrike?oldid=166031"
Community content is available under CC-BY-SA unless otherwise noted.