Nerf Wiki
Register
Don't have an account?
Sign In
Advertisement
in: Products marked as discontinued by Amazon, Articles with unsourced statements, Article stubs,
and 16 more

The Grip Blaster is a Nerf blaster that was released in fall of 2016 under the N-Strike Modulus series.

The Grip Blaster is a small blaster that can be attached to another blaster via its inverse tactical rail on top. As its name suggests, equipping it to another blaster allows it to double as a foregrip. It features the use of an intelligent air restrictor system that allows for either dart to be fired when two are loaded into the blaster.

It is speculated that the Grip Blaster was originally going to be much different, featuring a different priming mechanism, two dart holders, and the ability to fire both darts at once.[citation needed] 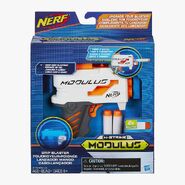 The packaging for the Grip Blaster. 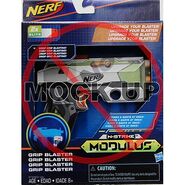