The GlowShot is a Nerf blaster that was released in spring of 2016 under the N-Strike series. It requires two "AAA" batteries for its glowing function to be operated.

It comes packaged with three Elite Darts and instructions.

The GlowShot is a small single-fire blaster; its main feature is its ability to have its shell glow. The glowing function is activated by holding in a long, orange button on the back end of the blaster's handle.

The GlowShot's plunger has a screw in it, and is similar to the Jolt EX-1's plunger. It also utilizes a short-stroke prime made for lower performance and lighter prime weight.

The GlowShot was originally known as the Stealth Glow during the prototype stage.

The GlowShot has been released in the following color schemes: 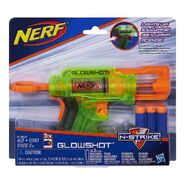 The packaging for the GlowShot. 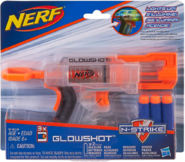 The packaging for the clear GlowShot.

The European packaging for the clear GlowShot.

A pre-release render of the GlowShot.