The General Grievous Blaster is a Hasbro blaster that was released in 2011 to promote the Star Wars: The Clone Wars television series.

It comes packaged with three Stiff Darts and a target.

The General Grievous Blaster is a small single-fire pocket blaster. The handle has space for two extra darts. There is also a small integrated scope located off the left side of the priming handle. Its included target is part of the packaging, similar to that of the one included with the Nite Finder EX-3.

Like its sibling blasters, the Captain Rex Blaster and the Cad Bane Blaster, it is based off of the Reflex IX-1. Unlike the other two blasters, however, it is not sold in a two-pack. 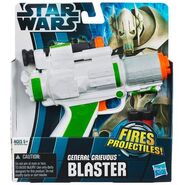 The packaging for the General Grievous Blaster.
Add a photo to this gallery
Retrieved from "https://nerf.fandom.com/wiki/General_Grievous_Blaster?oldid=197952"
Community content is available under CC-BY-SA unless otherwise noted.