The Galactagon is a Nerf Koosh blaster that was released in 2013 under the Koosh Galaxy series.

The Galactagon is a slide-action ball blaster that features a pentagonal turret that holds up to five balls at a time. Though it lacks a trigger and appears to be bow-action, the blaster fires upon pulling back the priming rod, rather than on release of the priming rod. The turret auto-advances upon pushing the rod back to its resting position.

The firing mechanism will not engage if a ball is not in the firing chamber. However, the turret will still rotate.

There is an attachment point atop the blaster for a Koosh Ball Clip to be attached to.

The Galactagon was meant to be a part of a second wave of Koosh Galaxy blasters in 2013, alongside the Komet Hunter. These plans were ultimately cancelled, but both blasters still had a very short window of availability in stores.[1] 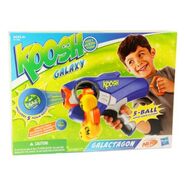 The packaging for the Galactagon.