The Fusefire is a Nerf disc blaster that was released in 2014 under the Zombie Strike series. It requires three "AAA" batteries to "charge" its discs.

It comes packaged with five Glow-In-The-Dark Discs and instructions.

The Fusefire features a single, green tactical rail on top, a horizontal integrated magazine, a sling point in its handle, and a disc storage space for up to five discs under its muzzle. The blaster's batteries are stored in its handle. The jam release switch is located on the priming slide.

The internal magazine can hold up to five discs, while an additional five can be stored in the front storage slots. 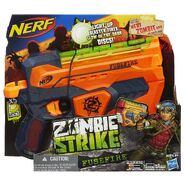 The pre-release Fusefire, which features a Vortex logo.
Add a photo to this gallery

Retrieved from "https://nerf.fandom.com/wiki/Fusefire?oldid=190159"
Community content is available under CC-BY-SA unless otherwise noted.