The Furyfire is a Nerf blaster that was released in 2009 under the Dart Tag series.

It comes packaged in the Furyfire 2-Player Set and cannot be purchased separately.

The FuryFire is a single-fire blaster with a ten-dart cylinder that auto-advances on trigger pull. The Furyfire features a single tactical rail on top. A single extra dart can be stored in the base of the handle.

It was introduced as the largest blaster in the 2009 Dart Tag lineup, and was the default blaster used in NDTL competitions. However, with the release of the new 2011 Dart Tag blasters, the Furyfire was no longer used in competitions.

In 2012, the blaster was re-released with a new, red color scheme as a promotional blaster for the film G.I. Joe: Retaliation.

The Furyfire has been released with the following color schemes: 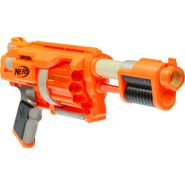 The orange Furyfire.
Add a photo to this gallery

Retrieved from "https://nerf.fandom.com/wiki/Furyfire?oldid=184832"
Community content is available under CC-BY-SA unless otherwise noted.