The Fury 4 is a single-fire revolver-style blaster similar in appearance to the Reflex 6 and MK 3. It features an integrated four-dart cylinder that auto-advances on the prime.

The Fury 4 was re-released under the X-Shot Ninja series as the No Rez.

A value pack for the Fury 4 includes forty-eight X-Shot Darts.

The packaging for the Fury 4. 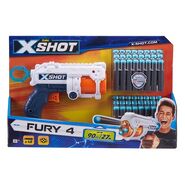 The packaging for the Fury 4 value pack.