The Freezefire is a piston-pressurized soaker that gets its name from its main feature: a wide refill opening that ice cubes can be loaded into, in order to chill the water. Its handle appears to also be the reservoir of the blaster, similar to that of the Helix and Vaporizer.

It advertises a firing range of up to thirty-eight feet (11.5 meters).

The Freezefire has been released with the following color schemes: 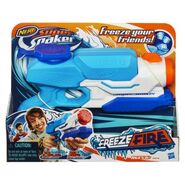 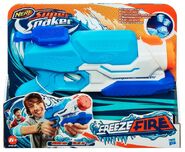 The European packaging for the FreezeFire. 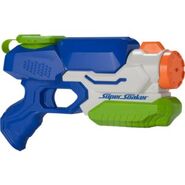 The blue version of the Freezefire.
Add a photo to this gallery

Retrieved from "https://nerf.fandom.com/wiki/Freezefire?oldid=184829"
Community content is available under CC-BY-SA unless otherwise noted.