The Flyte CS-10 is a clip system Nerf blaster that was released in spring of 2020 under the Alpha Strike series. It requires four "AA" batteries to be operated.

It comes packaged with a ten dart clip, twenty Elite Darts, and instructions.

It is a Walmart exclusive in the United States.

The Flyte CS-10 is a semi-automatic clip system blaster, similar to that of the N-Strike Elite Stryfe. It features two sling-attachment points near the front of the blaster. The front of the Flyte is a barrel extension point which features no divot for a locking bead, meaning that larger barrels may wobble around when moving the blaster.

A single tactical rail is located on the top of the Flyte, alongside a jam door. A single clip can be loaded beneath through the clip well and can be removed by pressing the clip release inside the trigger guard. The Flyte is compatible with other N-Strike clips. The clip well is very shallow, and clips will partially stick out of the well.

The four "AA" batteries can be loaded in the grip on the front of the blaster, which can easily be opened without needing to detach any screws.

The Flyte CS-10 was first leaked in mid-2019 in the form of BrickSeek listings, alongside the Talon and SMG-E. A year later in February of 2020, the Flyte was spotted on store shelves in several Walmart locations. In May of 2021, a blue color version was released.

The Flyte CS-10 has been released with the following color schemes: 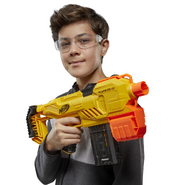 A Nerf model posing with the Flyte. 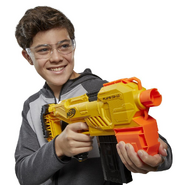 A Nerf model aiming the Flyte. 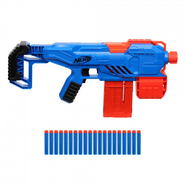 A blue variant of the Flyte.

The European packaging for the Flyte.