The Flipbow is a BOOMco. blaster that was released in 2015.

The Flipbow is a Qwikclip-fed blaster with a crossbow-like appearance. Despite its appearance, it has a flip-action priming mechanism similar to the Whipblast or the Breakflip. When primed, the crossbow arms will move backwards and, when the blaster is fired, they will move back to their original position. It has one incredibly short accessory rail at the front of the blaster and a strap point in the handle.

In addition to standard single-fire, the Flipbow can be fired in a fashion identical to Nerf slam fire. There is a short tactical rail in front of the clip well.

It advertises a firing range of up to seventy feet (twenty-one meters).

To reload the Flipbow, load in up to twenty darts in the included dart clip. Load and snap the clip into the top of the blaster. To prime it, rotate the grip forwards so that the handle is now in a horizontal position that's parallel with the blaster's shell; it will click into place once it reaches this angle and can't be pushed forward any more. Rotate the handle back into its original position to finish priming.

Pull the firing trigger to fire a dart.

The packaging for the Flipbow. 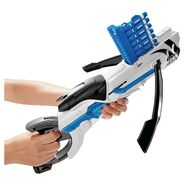 The Flipbow in the middle of being primed.
Add a photo to this gallery
Retrieved from "https://nerf.fandom.com/wiki/Flipbow?oldid=195971"
Community content is available under CC-BY-SA unless otherwise noted.