Nerf Wiki
Register
Don't have an account?
Sign In
in: Articles with unsourced statements, Hasbro blasters, Nerf blasters,
and 9 more

Not to be confused with the 2017 blaster with the same name.

The First Order Stormtrooper Deluxe Blaster is a Nerf blaster that was released in 2015 to promote the Star Wars: The Force Awakens film.

It comes packaged with a shoulder stock, a scope, a twelve dart clip and twelve Star Wars Darts.

The First Order Stormtrooper Deluxe Blaster is a medium-sized clip system direct plunger blaster. As its name suggests, it resembles the F-11D blaster rifle used by the First Order stormtroopers in Star Wars - The Force Awakens. It is very similar to the N-Strike Elite Rampage and has similar internals and performance. Like the Rampage, the Deluxe Blaster has the ability to slam fire.

It advertises a firing range of up to sixty-five feet (twenty meters). 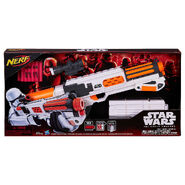 The packaging for the First Order Stormtrooper Deluxe Blaster. Strangely, its pump grip is installed backwards.