The Fireburst is a Dart Zone blaster that was released in 2015.

The Fireburst is a triggerless, HAMP-style blaster. It has two turrets, which rotate and alternate between one another as the blaster is fired. It is highly similar to that of the Lanard Over Under, which is nearly identical in appearance and firing mode.

The Fireburst is a re-release of the 2015 Stats Blast Revolution. 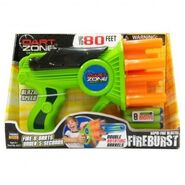 The packaging for the Fireburst.
Community content is available under CC-BY-SA unless otherwise noted.
Advertisement