The Finisher XX-700 is a Nerf blaster that was released in fall of 2020 under the RIVAL series.

It comes packaged with a seven round magazine, seven High-Impact Rounds and instructions.

The Finisher is a magazine-fed RIVAL blaster similar to that of the Apollo XV-700. It is a slide-action blaster ergonomically similar to the Kronos XVIII-500 and Heracles XIX-500, but feeds from a detachable magazine instead of an internal one. It is compatible with other magazines such as the seven round magazine and twelve round magazine.

The magazine has an opening in the side which allows the user to load the magazine without removing it from the blaster, by pulling down the follower. Thus unlike the Kronos, the Finisher can be reloaded even when primed, which means in theory, it would be possible for the blaster to hold eight rounds in total, if one round was chambered into the blaster, and seven more were loaded into the magazine.

There is a single tactical rail on top of the blaster. The blaster's breech protrudes from the barrel every time the priming handle is in the rear position, to chamber a round, similar to the Knockout XX-100. The magazine release is in front of the magazine.

The Finisher was first leaked online in early 2020 in the form of online listings without images. In late February of that year, official images were released for this, the MotoStryke, and the GhoulGrinder. 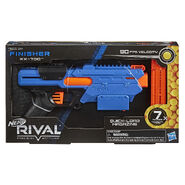 The packaging for the Finisher.