Not to be confused with the cancelled N-Strike fifty dart drum.

The fifty dart drum is a Nerf dart drum that was released in fall of 2019 under the N-Strike Elite series.

It comes packaged with the Titan CS-50 and cannot be purchased separately.

As its name suggests, the fifty dart drum can hold up to fifty Elite Darts at a time. Unlike other dart drums, the fifty dart drum is elliptical instead of circular. The drum is blue and orange with an Elite logo on the front. The back is windowed so the user can view the darts as well as the drum's mechanism. The bottom of the drum features a plastic bumper to prevent the bottom from being scratched. The follower consists of linked, dart-sized cylinders that assist the follower to ensure that darts feed correctly.

The drum is a successor to the original fifty dart drum, which was initially planned to be released with the Stampede ECS. However, the older version was cancelled because its patent wasn't approved in time, instead being replaced by an Eighteen dart clip.[citation needed] 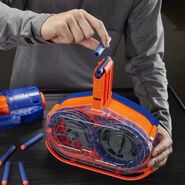 The fifty dart drum being loaded with Elite Darts. 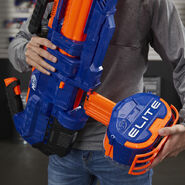 The fifty dart drum being loaded into the Titan CS-50.
Community content is available under CC-BY-SA unless otherwise noted.
Advertisement