The Fearless Fire is a Nerf blaster that was released in 2015 under the Secrets & Spies sub-series. It requires four "AA" batteries to be operated.

The Fearless Fire is a semi-automatic flywheel blaster that features an integrated twenty-dart drum. This drum rotates on firing trigger pull. It has a jam door just above where the drum is built in; unlike other jam doors that are translucent and slide back to open, the Fearless Fire's jam door is solid and flips open.

It has a small tactical rail on top of the blaster, as well as four strap points: one behind the muzzle, one on the bottom of each handle, and one in the integrated stock.

It advertises a firing range of up to seventy-five feet (twenty-two meters), as well as a rate of fire of about twenty darts in ten seconds. 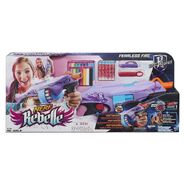 The packaging for the Fearless Fire. 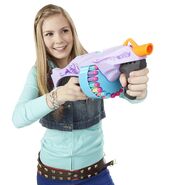 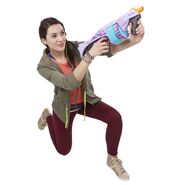 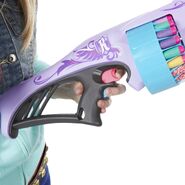 A close-up of the back end of the Fearless Fire.
Community content is available under CC-BY-SA unless otherwise noted.
Advertisement