The FOUR is a Nerf blaster that was released in 2020 under the ULTRA series.

It comes packaged with four ULTRA Darts and instructions.

A single ULTRA Dart can be loaded up front, with space on the bottom of the blaster to store two more darts. One tactical rail is located on top of the FOUR. The grip is the same design as the FIVE (minus guard) and the TWO.

The FOUR was first leaked in the form of a Target listing, featuring only a price. The FOUR was then leaked online in January of 2020, with images of it released on several Nerf-related Discord servers. Later, several members in the Nerf community manage to get the FOUR. 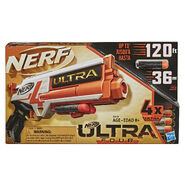 The packaging for the FOUR.
Add a photo to this gallery

Retrieved from "https://nerf.fandom.com/wiki/FOUR?oldid=202319"
Community content is available under CC-BY-SA unless otherwise noted.