An Excel Dart is a type of X-Shot dart that was released in 2013 under the X-Shot Excel series.

Excel Darts are slightly shorter than Nerf N-Strike Elite Elite Darts. They feature a small, black dart head with a rubber tip. Despite their unique size, Excel Darts can be used in most modern dart blasters.

The Excel Dart was awarded as Blaster Labs' Dart Range Test Winner, a title that proudly displays on refill packaging.

When the X-Shot Excel series was folded back into the X-Shot brand's line of products, the Excel Dart followed along. It would become the standard ammunition choice for all future X-Shot blasters, with new color schemes to fit the at-the-time standard colors of the brand. The dart type would lose its official Excel Dart name, and would be simply called "darts" or X-Shot Darts in packaging and official descriptions.

The Excel Darts were re-branded under the Adventure Force line with X-Shot re-releases of blasters. They now have a green body and black tip.

The Excel Dart has two variants:

The Excel Dart has been released with the following color schemes: 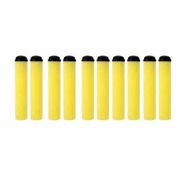 The yellow and black Excel Darts. 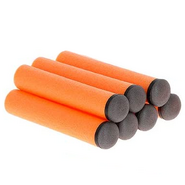 The orange and gray Excel Darts.

The Adventure Force variant compared to the standard X-Shot variant.
Community content is available under CC-BY-SA unless otherwise noted.
Advertisement