The Equalizer is a Buzz Bee blaster that was released in 2020 under the Air Warriors series.

The Equalizer is a revolver-style six-dart blaster. Its cylinder rotates and advances counter-clockwise on the prime.

It advertises a firing range of up to eighty-two feet (twenty-five meters).

It is a re-release of the Buzz Bee The Walking Dead Carl's Revolver with slightly improved performance. 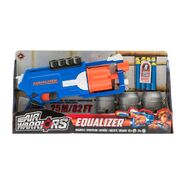 The packaging for the Equalizer.
Community content is available under CC-BY-SA unless otherwise noted.
Advertisement