The Epic Blast Pack is a BOOMco. blaster set that was released in 2014.

Both the included Twisted Spinner and Farshot feature exclusive color schemes, while the same Clipfire can be seen with the Head-to-Head Blaster Pack.

As of September 2014 it is the most expensive BOOMco. product.

The blaster set was also been seen under the title Ultimate Arsenal. It is unknown if this is simply a pre-production title or an international title. 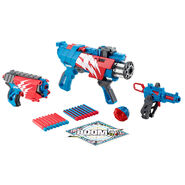 The contents of the Epic Blast Pack.
Add a photo to this gallery

Retrieved from "https://nerf.fandom.com/wiki/Epic_Blast_Pack?oldid=184582"
Community content is available under CC-BY-SA unless otherwise noted.