The Enforcer Belt Blaster is a Dart Zone blaster that was released in 2016. It requires six "AA" batteries to be operated.

It comes packaged with a forty dart belt, forty Super Darts, and instructions.

The Enforcer is a belt-fed flywheel blaster. It features an overhead carry handle. Its included belt is loaded into place through a flip-up port, located behind the carry handle. An additional red piece on the lower part of the blaster can be rotated down into place to hold the belt in position. Its power switch is located on the left side of the blaster, in front of the firing trigger.

It was later re-released as an Adventure Force blaster. Another re-release as the Enforcer Super Commando included additional ammo and accessories. 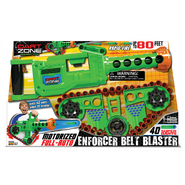 The packaging for the Enforcer Belt Blaster. 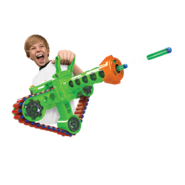 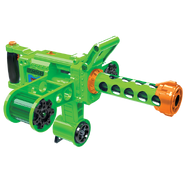 An Enforcer Belt Blaster without its belt loaded on.