Not to be confused with original Nerf missiles or the Titan's Mega Missile.

An Elite Missile is a type of Nerf ammunition that was released in 2014 under the N-Strike Elite series.

Elite Missiles are a large, foam ammunition type with fins and a foam head. It appears to be some sort of spiritual successor to the Mega Missile, which was included with the N-Strike Titan AS-V.1. Despite its name, it has little in common with the previous Nerf missiles; instead, it has an appearance similar to a Buzz Bee Glo-Missile.

It was first revealed on January 20, 2014 alongside the Demolisher 2-In-1. It was initially revealed with black fins, although a later Hasbro reveal showed the missile having red fins, matching the color of the blaster. Oddly, the production version of the missile was shown later on with black fins, scrapping the red fins previously seen.

In fall of 2015, these same missiles were packaged with the ThunderBlast.

In fall of 2016, the missile was packaged with the Tri-Strike, meant to be compatible with its Missile Launcher Stock.

The Elite Missile has been released in the following color schemes:

The green Elite Missile (with a distinct purple head) packaged with the Hulk Assembler Gear. 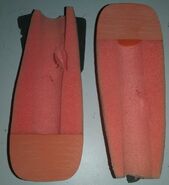 A cross section of the Elite Missile (worn from Nerf battle).