The Element EX-6 Action Kit is a Nerf blaster set that was released in 2008 under the N-Strike series.

Apart from Mission Kits, the Element EX-6 Action Kit was the only way to obtain the tactical scope.

The United Kingdom version of the Action Kit. 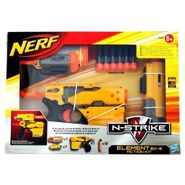 The United Kingdom version of the 2010 Action Kit.
Add a photo to this gallery

Retrieved from "https://nerf.fandom.com/wiki/Element_EX-6_Action_Kit?oldid=184569"
Community content is available under CC-BY-SA unless otherwise noted.