The Element EX-6 is an external mechanism Nerf blaster that was released in 2007 under the N-Strike series. It requires two "AAA" batteries for its light to be operated.

It features one tactical rail and one strap point located on the end of its handle. The handle of the Element is similar to the handle mold seen recurring on several N-Strike blasters including the Switch Shot, Recon CS-6, Barricade RV-10, and the Alpha Trooper CS-18.

Streamline Darts will not work with this blaster without modification, due to the dart post inside the Element.

This blaster was originally only part of the 2007 Disk Shot Set. At the time, it did not have a title and was simply known as the Disk Shot Blaster. It was given its own blaster set in 2008.

It was re-released in 2019 under the ICON Series, to celebrate the fiftieth anniversary of the Nerf brand.

The Element EX-6 is an extremely easy blaster to modify. It features nearly the same internals as the Nite Finder EX-3, another popular blaster for modifications. One notable difference is that the barrel pieces within the Element are not glued; the pieces are all easy to disassemble. This makes air restrictor modding and barrel exchanging extremely easy. 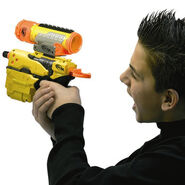 A Nerf model aiming the Element. 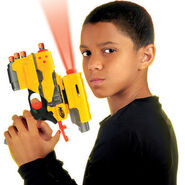 A Nerf model posing with the Element. 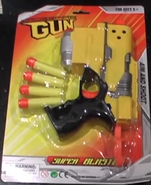 The Leyuan Crossfire Gun: Super Blaster, a bootleg of the Element..