watch 03:41
Wiki Targeted (Games)
Do you like this video?
Play Sound

The Electric Eel is a Nerf blaster that was released in 1997 under the Max Force 2112 series. It requires two "AA" batteries to use its glow-in-the-dark feature.

It comes with a four dart clip and four Glow-In-The-Dark Mega Darts.

The Electric Eel is a single-fire clip-fed blaster. It features an integrated flash bulb that, when the trigger is pulled, goes off and "charges" the flash bulb lights when the trigger is pulled, allowing the darts to glow efficiently. Unlike other blasters, like the Nite Finder, the light still needs to be switched on via switch near the priming mechanism. There is an indicator light located above the blaster that lets the user know when the flash bulb is ready for use. 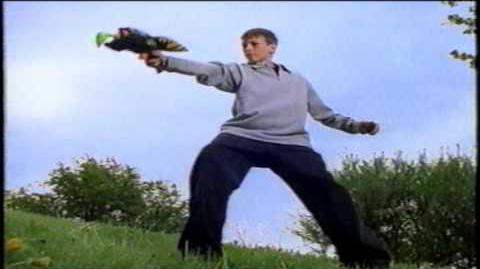 Retrieved from "https://nerf.fandom.com/wiki/Electric_Eel?oldid=184560"
Community content is available under CC-BY-SA unless otherwise noted.