The Echo CS-10 is a clip system Nerf blaster that was released in fall of 2020 under the Elite 2.0 series.

It comes packaged with a barrel extension, a shoulder stock, a ten dart clip, twenty-four Elite 2.0 Darts, and instructions.

The Echo is a slide-action clip system blaster similar to the N-Strike Elite Delta Trooper and Retaliator. It advertises itself as a "4-in-1" blaster, due to its compatibility with detachable barrel extensions and shoulder stocks. Despite the attachments both having tactical rails on them, the blaster itself has none. 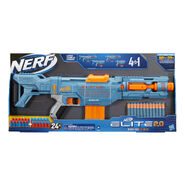 The packaging for the Echo.