The Eaglepoint RD-8 is a Nerf blaster that was released in January of 2022 under the Elite 2.0 series.

It comes packaged with a barrel extension, a scope, and sixteen Elite 2.0 Darts.

The Eaglepoint RD-8 is a bolt-action revolver-style blaster similar to the AccuStrike Series AlphaHawk. It has an eight-dart cylinder; more ammunition can be stored in its integrated shoulder stock. It is compatible with barrel extensions.

Two tactical rails are located on the blaster, and a third one is on the barrel extension. It also has slam fire capabilities. 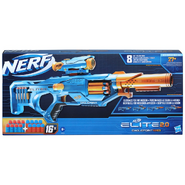 The packaging for the Eaglepoint RD-8. 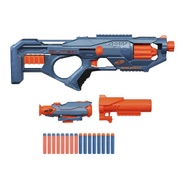 The Eaglepoint and its included accessories.