The Dual Ammo Blast is an Air Zone blaster that was released in 2012[1].

It comes packaged with eight Micro Darts and eight discs.

The Dual Ammo Blast, as its name suggests, is a blaster that can fire two different dart types: darts and discs. Both ammo types feature their own firing trigger; these can be depressed at the same time to fire both at once.

It is a re-release of the Banzai Dual Ammo Blaster. 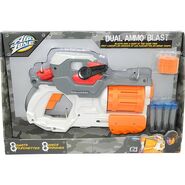 The packaging for the Dual Ammo Blast.