For information on the blaster's standard features, see Dual.

The Excel version of the Dual features boosted firing ranges compared to the original, advertising a firing range of up to fifty-five feet (sixteen meters).

The X-Shot Excel Dual would later be re-released back under the main X-Shot brand, when the Excel series was folded back into its standard product line. This would eventually see an additional boost in performance, with claims of firing ranges up to eighty feet (twenty-four meters).

The Excel Dual was released in a blaster set containing two Duals, twelve X-Shot Discs, eight Excel Darts, and six Practice Target Cans; this would later go on to be re-released as the 2x Dual under the X-Shot brand line.

The packaging for the Dual blaster set.

The packaging for the X-Shot Excel Dual. 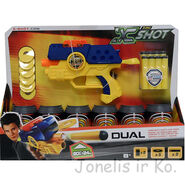 The X-Shot packaging for the Excel Dual.
Community content is available under CC-BY-SA unless otherwise noted.
Advertisement