The Dreadbolt is a Nerf blaster that was released in August of 2017[2] under the Zombie Strike series.

It comes packaged with a scope, five arrows, and instructions.

The Dreadbolt is a string-powered, crossbow-like blaster, similar to the Rebelle Courage Crossbow. It features an integrated shoulder stock. Five arrows can be stored above the loading shaft. It also features a single, short tactical rail.

To reload the Dreadbolt, pull the lever-like wrench in the front of the blaster back and forward. Load in a single arrow, so that the fins of the arrow are sticking out of the slits in the shell. Make sure the arrow is seated properly, so that it will stay in position when the blaster is moved or aimed around.

Pull the firing trigger to fire an arrow. 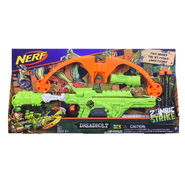 The packaging for the Dreadbolt. 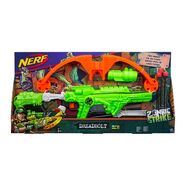 The European packaging for the Dreadbolt. 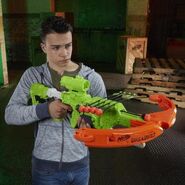 A Nerf model holding the Dreadbolt.

Retrieved from "https://nerf.fandom.com/wiki/Dreadbolt?oldid=184374"
Community content is available under CC-BY-SA unless otherwise noted.