Over Under Double Shot

The Double Shot is a Buzz Bee blaster that was released in 2011 under the Air Warriors series.

It comes packaged with four Micro Darts and four shells.

Similar to its original iteration, the Double Shot is a break-action dart blaster. It is loaded by shells, which eject out when it is opened back up to be loaded again. It features a two-step firing trigger - the user can pull it halfway to fire a single dart, or all the way to fire both loaded darts at once. Its two barrels are aligned vertically, rather than horizontally. The blaster also features a compartment in its integrated shoulder stock, where two additional shells can be stored.

The Double Shot is an updated model of the original 2005 Ruff Stuff Air Blasters Double Shot, with the barrels in an over-and-under style rather than its predecessor's side-by-side layout.

Outside of the United States, the Double Shot was released under the Ruff Stuff Air Blasters series, rather than Air Warriors.

It was re-released twice under the Air Warriors series, both times with new color schemes and boosted firing range.

The Double Shot has been released with the following color schemes:

The Ruff Stuff Air Blasters packaging for the Double Shot. 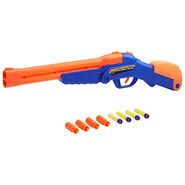 The blue and orange Double Shot.

The packaging for the blue and orange Double Shot.
Add a photo to this gallery

Retrieved from "https://nerf.fandom.com/wiki/Double_Shot_(2011)?oldid=190271"
Community content is available under CC-BY-SA unless otherwise noted.