The Double Rush (or the Rush outside of the United States) is a BOOMco. blaster that was released in 2016.

The Rush is a revolver-style blaster that fires two darts at once. The blaster's cylinder rotates, with each section having two chambers. Firing performance is noticeably lower when only one dart is chambered, due to air leaking out the open barrel.[1]

It features an accessory rail and two areas of dart storage: one behind the rail that holds four darts and slots in the handle that hold two darts.

The Rush was first revealed in a behind-the-scenes image of BOOMco. headquarters, as an in-development image pinned to the wall. At this point in time, it was known as the Double Punch.

The packaging for the Rush. 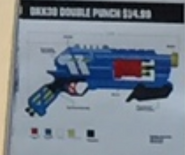 The leaked Double Punch.
Add a photo to this gallery

Retrieved from "https://nerf.fandom.com/wiki/Double_Rush?oldid=195974"
Community content is available under CC-BY-SA unless otherwise noted.