The Double Drench is a piston-pressurized soaker and was among the first of the 2014 Super Soakers to be discovered. Its handle appears to house the reservoir of the soaker, similar to that of the Helix and Vaporizer.

The Double Drench gets its name from its ability to fire from two nozzles at once, reminiscent of the XXP line. Each barrel has three nozzles, bringing the total to six nozzles.

The Double Drench has been released with the following color schemes: 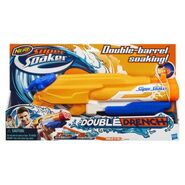 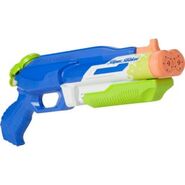 The blue version of the Double Drench.
Add a photo to this gallery

Retrieved from "https://nerf.fandom.com/wiki/Double_Drench?oldid=184363"
Community content is available under CC-BY-SA unless otherwise noted.