The Double Dealer is a Nerf blaster that was released in fall of 2016 under the Doomlands 2169 series.

The Double Dealer is a clip system blaster that holds two clips at a time; the blaster fires two darts at a time, one from each loaded clip. As it lacks a multi-step firing trigger, it has no single-fire mode; it can, however, be slam fired. It features an integrated shoulder stock that can store two additional clips. A clear jam door provides access for clearing jams.

The reliability of the Double Dealer is questionable, as some units have had severe jamming issues.[citation needed] These generally occur while firing quickly or slam firing the blaster. This may be due in part to a weak spring.

Another issue is that there is a large slot cut into the bottom of the plunger tube. There is a plastic peg attached to the plunger rod that moves through this slot, presumably to help guide the rod but it is unknown why that is necessary when the rod is perfectly guided just by the stopper in front of the catch.[1]

The Double Dealer was first announced in January 2016 by Popular Mechanics.[2]

It was included in the 2019 re-release of the Doomlands series as an Amazon exclusive.

Despite having two barrels, the Double Dealer only has a single plunger system. 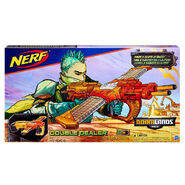 The packaging for the Double-Dealer.

A 3D render of the Double-Dealer.