The Double Barrel Shooter is an Air Zone blaster.

It comes packaged with an additional cylinder and twelve Quickfire Darts.

Its second cylinder can be stored under the first, snapping into place via plastic peg. The main, firing cylinder is held in place by the front muzzle part of the blaster, which folds down when a black button on top is pushed in.

It would later be re-released as the Quick Fire 12 Shooter Double Barrel, with a new color scheme.

The Double Barrel Shooter has been released with the following color schemes:

The packaging for the Double Barrel Shooter. 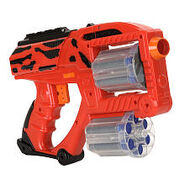 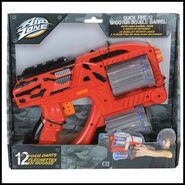 The packaging for the Quick Fire 12 Shooter Double Barrel.
Community content is available under CC-BY-SA unless otherwise noted.
Advertisement