The DoubleDown is a Nerf blaster that was released in spring of 2015 under the N-Strike series.

The DoubleDown is a double-barreled blaster that features intelligent air restrictors that allow the blaster to be fired from either barrel. When both barrels are loaded the first dart is fired from the right barrel first and then followed by the left barrel.[2] It features dart storage for up to four darts under the muzzle and one strap point located in the handle. A set of iron sights is also on the top of the blaster, which can be used as a guide for aiming shots.

The priming mechanism used on the DoubleDown is reminiscent of blasters such as the N-Strike Elite Firestrike.

The DoubleDown was first spotted by a user on Facebook who sent the images to blogger Awesomely Nerf on January 6, 2015.[3] Originally it was believed by many that the blaster would fire both barrels at once akin to a single-barrel Rough Cut 2x4. It was the third 2015 N-Strike blaster revealed, after the SharpFire and SlingStrike.

The DoubleDown has an unusually long plunger tube and spring for a Jolt-based blaster.[2] 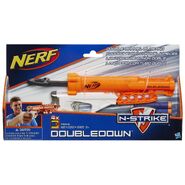 The packaging for the DoubleDown.