The Diamondista is a Nerf blaster that was released in fall of 2014[1] under the Secrets & Spies sub-series.

It comes packaged with a message decoder, two Message Darts and one Collectible Dart.[1]

The Diamondista is a crossbow-like blaster that has bowarms located on the front of the blaster. It does not feature a plunger rod and instead is powered by an elastic cord attached to the bowarms, similar to the CrossBolt. It features a single tactical rail. Although not mentioned on the packaging, the bowarms are capable of storing up to four darts. 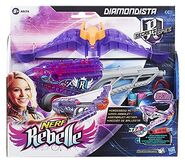 The packaging for the Diamondista. 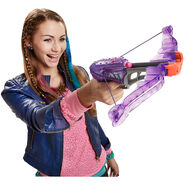 A Nerf model aiming the Diamondista.
Add a photo to this gallery

Retrieved from "https://nerf.fandom.com/wiki/Diamondista?oldid=184326"
Community content is available under CC-BY-SA unless otherwise noted.