The Destructor is a Dart Zone blaster that was released in 2019. It requires six "AA" batteries to be operated.

It comes packaged with thirty Super Darts and instructions.

The Destructor is a flywheel system blaster that has an integrated dart hopper system. It is very similar to the Commandfire, as they both contain this hopper system. They also both contain grips on the bottom of the blaster. It does not, however, include a dart storage compartment. In this place is a handle so the blaster can be wielded from the hip. The handle can be put in two positions.

The hopper cover features an "accordion"-style follower that expands while firing to help guide dart feeding. However, the hopper is not required to be closed in order to be fired, but this may cause feeding issues without the follower. The blaster can also be loaded by a small compartment on the side of the hopper that opens to load the hopper one dart at a time. This is useful in order to avoid having to open the whole hopper just to load a few darts.

The blaster feeds darts into the flywheels via a conveyor belt system. Apart from the follower, the blaster features other mechanisms that reduce chances of misfeeds. Above the conveyor, there are two flaps that constantly agitate the darts to ensure that they do not get stuck. There are also two spinning claws that encourage darts to move along the conveyor.

It has two sing mounts: one on the rear of the blaster and one above the muzzle.

The blaster has a chainsaw style grip, with the acceleration trigger featured as a button on the top, while the actual firing trigger is on the bottom.

To reload the Destructor, push the switch on top of the hopper forwards and then pull sideways in order to open the hopper. Load in up to thirty darts, while making sure the dart heads all face towards the muzzle. Close the hopper by pushing the hopper door shut, making sure it snaps back into place.

To load the hopper via the compartment, open the grey slot on the side of the blaster and simply push in darts.

Press down the "rev-bar" on top of the handle and then press the firing trigger to fire darts. 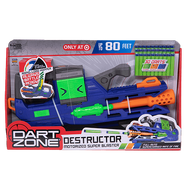 The packaging for the Destructor. 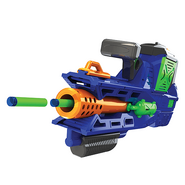 The Destructor being fired. 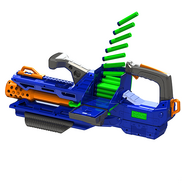 The Destructor being loaded by its hopper. 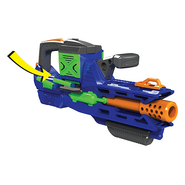 The Destructor being loaded by its secret compartment.