The Desolator is a Nerf blaster that was released in fall of 2016 under the Impact Zone sub-series. It requires four "AA" batteries to be operated.

The Desolator is a clip system flywheel-powered blaster with semi-automatic function. It has two tactical rails above the blaster and two sling points: one in the handle and another one under the muzzle. It also has clear plastic parts, allowing the user to see some of the blaster's internal workings.

Despite being compatible with other clip system clips (such as a Buzz Bee eight dart clip), the acceleration trigger won't work when the clip is normally inserted. This is due to how loaded ammunition lines up with the blaster's acceleration trigger safety lock; pushing the clip firmly in place will help avoid this issue.

The Desolator was announced at the 2016 Toy Fair, along with the Longarm.

In 2019, the Desolator was re-released along with several other Doomlands 2169 blasters. 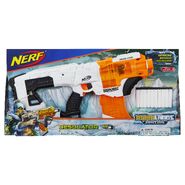 The packaging for the Desolator.

A pre-release render of the Desolator.