The Deploy CS-6 (known as the Flash Break CS-6 in Japan) is a clip system Nerf blaster that was released in 2010 under the N-Strike series. The built-in flashlight requires three "AAA" batteries to be operated.

It comes packaged with a carry strap, one six dart clip, six Streamline Darts, and instructions.

The Deploy is a pump-action single-fire blaster. It is unique in that it can change between two different functional "modes": Flashlight Mode and Blaster Mode. It an integrated carry handle, atop of which is a tactical rail, as well as the button used to switch between modes. The light itself is built into the clip well, which sits in two different positions, based on what mode the blaster is in; the power switch for this is located on the left side. A jam door is located on the right side of the blaster, and is used for clearing dart jams. A single dart can be stored in the pump handle.

Flashlight Mode allows the blaster to be used as a flashlight. It is compact, with the blaster folded up on itself; the grip is folded up, the back of the blaster pushed in, and the clip well flipped up vertically, above the muzzle. In Flashlight Mode, the Deploy cannot fire.

Blaster Mode converts the Deploy back to being able to be used as a dart blaster. Pushing the button built into the carry handle will deploy the blaster for use, hence its name. Everything will flip out and extend into place, readying it for use.

To switch to Blaster Mode, press the "Deploy" button on the top of the blaster's carrying handle.

To switch to Flashlight Mode, the user must physically set the blaster's parts into place: the clip/light must be flipped back up and the shoulder stock must be pushed forward by pressing the orange triangle button and pushing the stock forward.

The use of a thirty-five dart drum will cause the deploying function to not drop the clip well to its respective position, unless tilted to the left when doing so; when it does drop down, it will do so with considerable force. An eighteen dart clip is not affected by this.

The orange pump action handle can also become stuck and will only be able to slide halfway.

It is not advised to deploy the blaster while holding it by the priming bar. If opened while doing this, the user's hand may be hit by the flashlight.

The Deploy was first seen online alongside the Longstrike CS-6 in January of 2010. The blaster was then seen shortly after at the 2010 New York Toy Fair.[2]

Later variants of the Deploy did not include the carry strap it was initially packaged with.

The Deploy has been released with the following color schemes:

The Deploy has been sold in a value pack with a bonus Flip Clip, ten Streamline Darts and two clips. The "Refill and Reload" variant includes six extra Streamline Darts. 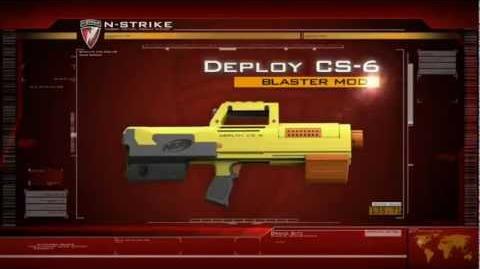