The Demolisher 2-In-1 is a Nerf blaster that was released in fall of 2014 under the N-Strike Elite series. It is operated by four "AA" batteries.

The Demolisher 2-in-1, as its name suggests, is essentially "two blasters in one". It features a clip system-compatible dart-firing blaster on the top half, and a HAMP-action, under-barrel missile-firing blaster.

The dart blaster is battery-operated and uses a flywheel system and has a acceleration trigger to allow the user to rev up the motors for use. The muzzle is compatible with removable barrel extensions. A jam door on top of the blaster allows the user to clear jams as they occur.

The missile blaster is permanently integrated into the blaster.[4] This is entirely independent from the dart launcher and is not controlled from the acceleration trigger of firing trigger, instead firing through HAMP-action.

The whole blaster itself is compatible with detachable shoulder stocks. It has two tactical rails: one on top and one on the right side of the blaster. There are also two strap points, one on the handle and one near the muzzle, and an iron sight located behind the jam door.

The Demolisher 2-in-1 was known as the Destroyer prior to its release. Pre-production mockups of the Destroyer revealed that it had a few differences when compared to the Demolisher, such as an additional carry handle on the top of the blaster. Its Elite Missile launcher also had a firing trigger as well as a pump, hinting that the launcher was intended to either be powered by an air tank or plunger system.[citation needed]

The Demolisher 2-In-1 was first announced on January 20, 2014.[5] The original listing claimed the blaster would fire Mega Darts, despite the picture clearly showing a missile. It became the first Nerf blaster to use a banana clip, not including non-Nerf blasters or Super Soakers, which led some in the community to fear that jams could frequently occur with the blaster.[6] Rampant speculation in the community led to arguments over whether or not the missile launcher was detachable, whether it had a trigger or not, and whether it was air-powered or manually-operated.[7] Some in the modification community have removed the launcher to create interesting variations.

The Demolisher made its first public appearance outside of small testing areas at the 2014 New York Toy Fair, alongside many other newly discovered blasters.[8] Official images of the Demolisher, alongside the Mega ThunderBow and SlingFire, were revealed when German website Bankcroft.de listed all three products for sale in May of 2014.[9]

The Australian release was in September.[1] This blaster was given a soft release on the 26th of June in Singapore. It was also released on the end of July in Malaysia.

The Demolisher was re-released under the N-Strike Modulus series in fall of 2018, and was included in the Ultimate Customizer Pack blaster set.

The Costco-exclusive Demolisher 2-In-1 Bonus Pack includes the Demolisher, as well as an extra banana clip and ten extra darts.[10] In Germany, this value pack is exclusive to Rossmann drug stores.[citation needed]

Like most flywheel blasters, the Demolisher can undergo modifications such as lock removal, rewiring, and voltage modifications.

The missile launcher can be completely removed and replaced with an under-barrel tactical rail, leading to a more compact and sleek design. Most prefer not to perform this modification as it essentially defeats the purpose of buying a Demolisher in the first place.

The missile launcher's o-ring can be replaced or bedded with electrical tape to increase its air seal. This will allow the missiles to fly further as less air escapes during pumping, however, the blaster will be harder to pump and the handle may get stuck at times. A grill on the front of the launcher's tube can be removed to increase air flow and make the missiles fly farther. 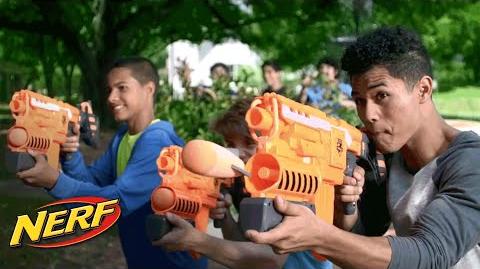 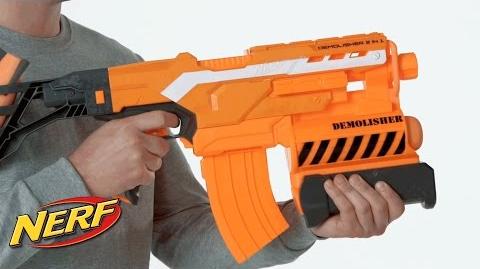 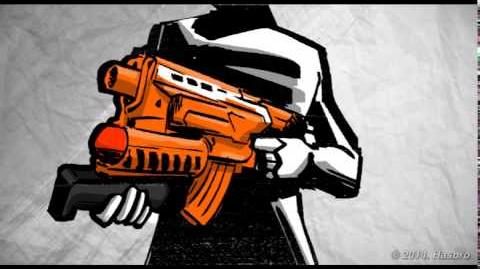 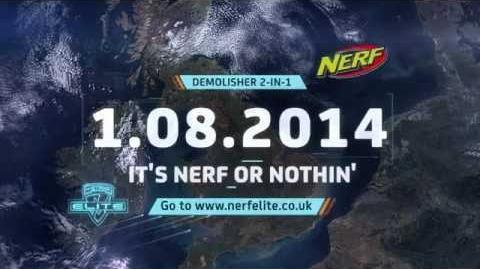