For the original N-Strike Elite blaster, see Demolisher 2-In-1.

The Demolisher, also known as the Demolisher 2-In-1, is a clip system Nerf blaster that was released in fall of 2018 under the N-Strike Modulus series. It requires four "AA" batteries to be operated.

It comes packaged in the Ultimate Customizer Pack, but can be purchased separately with its original contents as an Amazon exclusive.

The Demolisher is a re-release of the 2014 N-Strike Elite Demolisher 2-In-1. Similar to the original blaster, it features "two blasters in one": a semi-automatic flywheel dart blaster as the main unit and an independent pump-action Elite Missile blaster under the dart blaster's muzzle.

It has two tactical rails: one on top and one on the right side of the blaster. There are also two strap points: one on the handle and one near the muzzle. It is compatible with barrel extensions and detachable shoulder stocks.

The Demolisher was first unveiled at the 2018 Australian Toy Fair.[1]

A standalone version with its original content was re-released as an Amazon exclusive in October 2020. 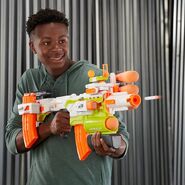 A Nerf model firing the Demolisher.