Similar to the older Switch Shots series, the DartFire is an attempt to incorporate both darts and water into a single blaster. However, its dart and water-firing aspects are powered by different means.

The dart-firing component of the DartFire features a five-dart rotating cylinder with a double-action mechanism much similar to the Dart Tag Snapfire 8. The blaster uses a reverse plunger. The water-shooting aspect of the soaker is pump-action and piston-pressurized.

On top of the DartFire is the cap for the water tank, as well as an area to store up to five darts.

The dart-firing part of the DartFire is a self-contained unit with its own trigger (which the shell's trigger actuates through a pull bar). This would have made it a good candidate for reshell or shell minimization modifications as a sidearm. It can not, however, be used as its own standalone blaster, as the trigger's return spring is attached to the shell, instead of to the self-contained blaster. 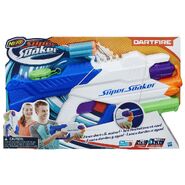 The packaging for the DartFire. 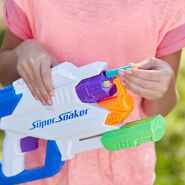 The DartFire being loaded with darts. 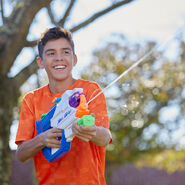 A Nerf model firing water from the DartFire. 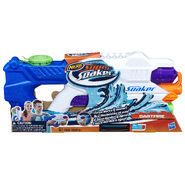 The updated packaging for the DartFire.