The DP-E is a Nerf blaster that was released in 2019 to promote the video game Fortnite.

It is a Target exclusive in the United States.[1]

The DP-E is based on the Epic Dual Pistols from Fortnite. The DP-E is essentially a reshell of the SP-L, with low-profile iron sights instead of the SP-L's reflex-style sight. It is a slide-action blaster and utilizes an internal clip that can hold up to three darts. The blaster is compatible with barrel extensions. 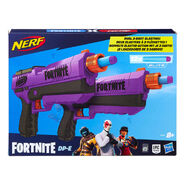 The packaging for the DP-E. 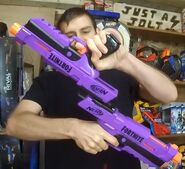 Two DP-E blasters being primed off one another.