Not to be confused with the Micro Shots blaster of the same name.

The D.Va Blaster is a Nerf promotional blaster that was released in 2019 under the RIVAL series to promote the video game Overwatch.

It comes packaged with three Overwatch High-Impact Rounds, and instructions.

The D.Va Blaster is a breech-loading RIVAL blaster that is based after the Light Gun used by the character D.Va. Up to three High-Impact Rounds can be inserted into the internal magazine via the top slot. A trigger safety is located on the right side of the blaster near the firing trigger. A set of iron sights is located on top of the blaster. The blaster is advertised to have "simulated recoil", where after firing, a movable piece near the slide forcefully rocks back and forth, creating a "recoil-like" effect similar to the weapon in-game. There is a bunny-shaped charm on the bottom of the grip.

A rare, yellow version of the D.Va Blaster, known as the B.Va Blaster has been released in limited quantities around the world. The blaster's color scheme is based on the in-game B.Va skin, and has a bee-shaped charm instead. 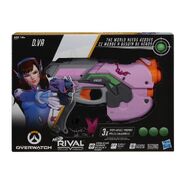 The packaging for the D.Va Blaster.

A pre-release render of the D.Va blaster.

A promotional image of the D.Va Blaster.
Add a photo to this gallery

Retrieved from "https://nerf.fandom.com/wiki/D.Va_Blaster?oldid=197243"
Community content is available under CC-BY-SA unless otherwise noted.