The Cyclotron is a Nerf ball blaster that was released in 2003 under the Atom Blasters series.

The Cyclotron is fired by turning a crank on the right side of the blaster. The crank operates a kind of rotary paddle mechanism that takes a ball from the blaster's eight-ball tube magazine and thrusts it through the barrel, firing it. It is not designed for left-handed use.

During production, the Cyclotron was under the name Rapid Fire Ballzooka. This was to be the replacement to the Ballzooka MP150.

The concept art of the Rapid Fire Ballzooka.

The packaging for the Cyclotron. 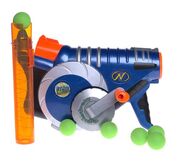 The Cyclotron without its tube connected.
Add a photo to this gallery

Retrieved from "https://nerf.fandom.com/wiki/Cyclotron?oldid=183950"
Community content is available under CC-BY-SA unless otherwise noted.