The Cyclonic is a Buzz Bee blaster that was released in 2016 under the Ultra-Tek sub series. It requires four "AA" batteries to be operated.

It comes packaged with a twenty dart clip and twenty Long Distance Darts.

The Cyclonic is a fully automatic flywheel clip-fed blaster. Unlike other modern flywheel Nerf blasters, the Cyclonic does not feature an acceleration trigger. Instead, its firing trigger revs up the flywheel system when pulled halfway back and fires darts when pulled all the way back. The Cyclonic also features a turret-style muzzle that rotates when the flywheels are being revved. Two LED lights illuminate the clear plastic on the muzzle. Its clip release button is located under the blaster, next to the clip.

It is cross-compatible with Nerf clip system clips and darts.

The Cyclonic was re-released back into the Air Warriors series in 2019. 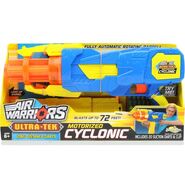 The packaging for the Cyclonic.
Community content is available under CC-BY-SA unless otherwise noted.
Advertisement