The Crupper FDG-20 is a Banzai blaster. It requires three "AA" batteries to be operated.[1]

The Crupper is a motorized flywheel blaster with an integrated twenty dart turret. It also has an integrated shoulder stock which houses the batteries. It is similar in style, shape, and performance to the Buzz Bee Tommy 20 and Mech Tommy 20.

Information on the Crupper's initial release is limited, with only the name known from a lone YouTube video.[1]

The Crupper was re-released under the Air Zone brand, as the 20 Shot Machine Blaster, replacing the original name on the shell with a generic Air Zone sticker. It was given another Air Zone re-release, with a new red and black color scheme, and a new name: Motorized Rotary Rapid Blaster. It was given two final re-releases, back under the Banzai brand, as the Moto-Mech Rotary Blaster; both versions had different color schemes.

The Crupper FDG-20 has been released with the following color schemes: 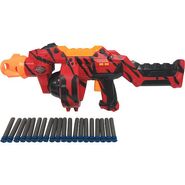 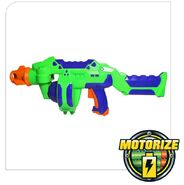 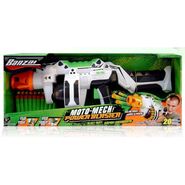 The packaging for the white Moto-Mech Power Blaster.
Add a photo to this gallery

Retrieved from "https://nerf.fandom.com/wiki/Crupper_FDG-20?oldid=183938"
Community content is available under CC-BY-SA unless otherwise noted.